the trailer and the tiger... 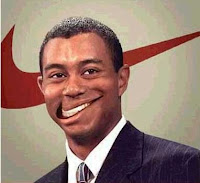 Crime scenario 1: I am awoken at 9am on a Sunday by two police officers, a male and female from the local station who want to ask me a few questions…

Bloke Cop (BC): ‘Good morning, Sir…is that your boat and trailer outside on Cunt Point Road??’
Me (M): ‘I hope so. Why is there something wrong??’
Chick Cop (CC): ‘Can you please come up to the street and take a look at something??’
M: ‘What’s the problem ??’
CC: ‘Please accompany us to street level, Sir.’

The three of us proceed to Cunt Point Road, where the bloke cop points to my kerb-side trailer tires, both of which are flat as his partner’s chest…

BC: ‘Do you know anything about this, Sir??’
M: ‘I know the tires are flat…and it appears that the actual air-valves have been removed to make the job of re-inflating them a pain in the ass.’
BC: ‘Any idea how it might have happened??’
M: ‘Well the only thing I know for sure is that I didn’t do it myself.’
BC: ‘Are you saying that you believe someone else has done this??’
M: ‘Yes, Columbo…of course that’s what I’m saying.’
CC: ‘Do you have any idea who might want to do this??’
M: ‘Probably one of my fuck-head neighbors who thinks the boat is out of place on this street…or maybe a gang of tire-valve thieves is operating in the area. How the fuck should I know.’
CC: ‘No need to be a smart-ass, mate.’
M: ‘What?? Mate?? Did you just call me ‘mate’?? I’m not your mate…and you know full well what my name is…so either call me Mr Fingers or Sir.’

Since I can’t punch the chick cop’s head in, (mostly because it’s illegal but partially because she probably knows some evil chick cop karate and will put me in hospital), I walk up to the flat tires and kick them as hard as I can.

MC: ‘So, what do you intend doing about this??’
M: ‘About what…about fixing the tires…or solving the crime…or exacting bloody, murderous revenge on the neighbours??'
CC: ‘About fixing the tires.’
M: ‘Well, I thought I might re-inflate them at some stage.’
MC: ‘When??’
M: ‘When it’s convenient.’
CC: ‘No, you need to fix them now, Sir…you can’t leave the trailer in an un-roadworthy condition on the street.’
M: ‘Well I have things to do so it will have to wait until I have time to do it.’
CC: ‘Well don’t be surprised if you return to find the trailer has been booked.’
M: ‘Excuse me?? Listen, Miss Marple…in case you haven’t worked it out I am the victim here of a crime…not that I expect you to commit any of your revenue-raising resources to solving it…but I am still the victim here.’
CC: ‘Well we will be back in a few hours to see if the trailer has been fixed…otherwise we will have to issue a…’
M: ‘Are you some sort of complete cunt??'
CC: ‘I beg your pardon, Sir.’
M: ‘Don’t beg my pardon…you heard what I said…and your big, shiny badge doesn’t mean you have a big, shiny vadge in my book.’
MC: ‘Sir, there’s no need to use that sort of language in front of the lady Constable.’
M: ‘She’s a fucking Cunt-Stable alright…a whole stable of cunts…it’s 9am on a Sunday morning, my trailer has been vandalized and she’s giving me lip.'
MC: ‘Sir, I won’t tell you again about using that sort of language.’
M: ‘Oh go fuck yourself…what a pair of cunts you two are.’

Fast-forward two hours to Cunt Point Police Station, where I have been taken and charged with using offensive language, issued a fine and told I may appeal both in court should I choose to bother…

Crime Scenario 2: Tiger Woods apparently lies bruised in his bed, his wife having allegedly taken exception to the news he was cheating on her and expressed some feelings of her own on his head with his very own one-wood. Meanwhile his car is outside the house nestled against a tree, the windows smashed and another golf club lying nearby. The Florida Highway Patrol is at the entrance to the gated community where Tiger Woods lives, but investigators are told he is unavailable...please come back later…
Posted by fingers at 7:21 PM 62 comments:

i never thought i'd be reading this but...

I don’t begrudge anyone a blog; I’m all for it…it’s everyone’s right to get a free page on the internet and fill it with whatever they desire…brilliant, good, bad, indifferent or just plain garbage.
Write whatever you want; it’s not compulsory that I read it.


And you know something…I don’t mind if you’re two-hundred kilograms overweight and want to blame your parents for it rather than eat less and exercise more.
I don’t mind if you’re fifty kilograms underweight and want to blame magazines and television for it rather than go and see a psychiatrist or a nutritionist or just plain stop being a nut.
I don’t mind if you married the wrong man at sixteen and want to blame the twelve children you bore him for having to stay married rather than take your chances out there on Struggle Street.
I don’t mind if your work colleagues hate you.
I don’t mind if you hate your neighbours.
I don’t mind if you’re broke or broken-hearted.
I want you to get it all out…like a Woody Allen movie…just get all that emotional crap off your plate and onto mine so I can feast on the excruciating minutiae of your suffering…
Just please don’t tell me about your sex lives…PLEASE.
Not the blowjobs you’ve given (especially you, Memphis), not the oral you’ve had, not the five-hour marathons that left your snatch looking like road-kill and certainly not your most recent experiences with bum-sex (that means you, Gaylord).
Over the years I’ve had to endure hundreds of posts like these…below are just a few…no names no pack drill…if you recognize your handiwork or mouth-work…or any other work…there’s no need to panic because I’m not going to ‘out’ you.
I just want to make a few observations…


Example 1: Fast forward to last night. Without using the entire strap-on (I just decided to introduce the rubber dong to X’s lovely ass. I first stroked his cock…just to tease him a little. Next, I lubed our new toy and X’s delicious ass and began to insert the toy very gently in and out. I kept the toy right there-in one spot for the time being. I told X to start stroking his cock.

Thanks very much. I was having my breakfast as I read your lovely post. There’s nothing like Vegemite toast and a cup of tea while I try not to imagine your partner being ass-raped with a rubber Maglite while abusing himself like a chimpanzee…

Example 2: He was still damp as he held my head and kissed me in his special and gentle way. In seconds his cock was rock hard as our kissing grew more urgent. I very gently stroked his knob over and over, running all five of my fingers from under the ridge to meet at the top. A drop of pre-cum appeared, glistening on the end of his cock. I flicked it off quickly with my tongue. He cock grew another centimetre. If I am not into him enough to want to lick every inch of his body, to breathe in his scent, to bury my face in his hair, to suck his fingers one at a time, to nibble his lips, to swallow his sweet cum.
Then I wouldn't be giving him head.

Well, isn’t that just all a bit dreamy ?? I’m surprised Hallmark hasn’t made a card expressing that beautiful sentiment. ‘Love is not spilling a drop.’

Example 3: For the longest time, I've been guilty of being a size queen and last night, X did not disappoint. However, while he was sliding in and out my dripping honey-pot, it was his girth that did the magic. Not his length. Now, yes, he was a big boy - probably 7 or 8 inches but it was his thickness that made me squirm.

Confucius say: Only reason woman need wide cock is if she have big honey-pot.

Example 4: He pressed into me, filling me up with his cock and I was alright. My breathing picked up and I felt wonderful. He had me near the edge but I had not climaxed…he couldn’t hold it in and came in me after some hard fucking. He filled me with his seed and I lifted my hips to get him in deeper, though he did spill onto the seat just a little.

This would have been far classier if you’d been doing it in a Bentley rather than a public toilet at the time. You SLUUUUUUUUUUUUUUUUUUUT.

Arrrrgggggggghhhh…my eyes…my poor eyes !!!
For the love of Christ…make it stop…
Posted by fingers at 11:12 PM 41 comments: