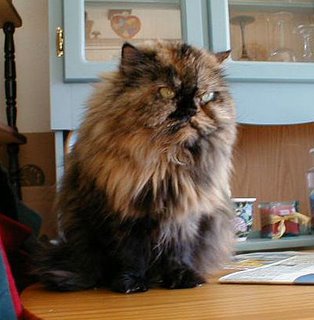 The essence of blogging appears to be a sharing of the excruciating minutiae of one's daily existence with the world at large.
So, whilst I conjour up a large platter of anecdotal nail-clippings from what has so far passed for my life, may I shamefully introduce my cat, 'Fuckface'.
He's 45 years old, we share the exact same birthdate, 30/11/1960...and he hates me.
To be honest, I don't like him much either, however circumstance has dictated that our lives remain inextricably entwined.
'Fuckface' was the reult of a cross-species-breeding-experiment-gone-bad back in the 60s; he is part longhaired Persian/part barn owl, which makes him a terror on mice but not as quite as wise as his creators had hoped. In almost two thousand attempts he has never once beaten me at Trivial Pursuit.
We have a mutual tolerance for each other born mostly out of desperation. He needs me to feed him each day, and I occasionally farm him for organs when one of mine expires.; I have both his kidneys and one of his lungs.
Some nights we just sit on our respective couches staring each other down. I know he's hoping to dine on my face should he outlive me, and he's well aware of my plans for turning him into an oven mitten some day.
In the coming months/years/millenia...I hope to share with all of you, more of my life with 'Fuckface'...
Posted by fingers at 3:59 PM 30 comments: