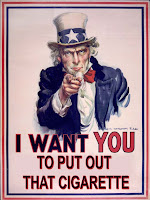 Recently I have begun seeing this new chick; it doesn’t really matter who she is other than the fact she is new and I am sort of dating her.
Unsuccessfully…as usual.


On our first date, things were going smoothly enough and it was refreshing not to be embroiled in the sort of interview-type Q&A session that characterizes most first meetings. We talked of things rather than people, of issues instead of opinions and of ideas in place of feelings. Every so often, I would excuse myself from the table and go outside for a cigarette, returning to find her, as is often the case these days with chicks left unattended for more than two minutes, answering her SMS messages.
No big deal; good time management actually.
On my third such return, whilst tapping away at her little keypad and without taking her eyes off the IPhone screen, she offered the following advice: ‘Fingers, you really ought to think about giving up smoking.’
Naturally, considering how well the date was proceeding, I assumed she was negotiating the future terms of the party I could reasonably expect to have in her pants at some point, rather than just doling out trite medical warnings. That she was telling me I would shortly be fucking her six ways from Sunday as long as I didn’t smell like an ashtray, rather than hinting unsubtly at the damage I was doing to myself with this filthy habit. That she was suggesting my nicotine-free ferret was welcome to jump through her furry hoop anytime, rather than simply dispensing clichéd health tips.
Now, nothing much happened that evening, carnally speaking…however I did resolve to quit smoking before date number two in order to maximize the potential for a game of ‘Mr Wibbly-Wobbly Hides His Helmet’. This of course proved much harder to do than it was to consider doing, so instead I pretended to quit, washed my clothes thoroughly beforehand, swallowed fifty ‘Fisherman’s Friends’ and took no cigarettes with me the next time.
An hour into the date, which was going exceedingly well, I said, ‘So, have you noticed anything tonight ??’
‘I’ve noticed you haven’t had a cigarette yet,’ she replied.
‘That’s right…I was thinking about what you said last time and took your advice,’ I lied without adding, ‘Now, is there any danger of you living up to your end of the deal and smoking my bat ??’
‘That’s excellent…has it been hard giving up??’ she enthused.
’Not as difficult as I imagined it would be,’ I beamed, now extremely comfortable living the lie.
‘Are you using patches or pills ??’
‘No, just brute willpower.’
At this point in time I’d have gladly set fire to my pubes and inhaled the smoke just for a hit.
‘Do you feel any better for it ??’
‘No, I can honestly say I don’t feel any better,’ I answered, quite truthfully as it happens, since the health benefits of pretending to quit had not become apparent yet…

Of course she didn’t put out on the second date, so I feel rightfully vindicated in practicing the deception…and I feel no compunction whatsoever going on with the charade for date number three later this week. I’ve always said that smoking would be totally negotiable for the right chick but giving up the addiction of a lifetime for merely the promise of something which is bound to end in failure anyway…just doesn’t seem like a good risk/reward trade at this point…
Posted by fingers at 7:55 PM 50 comments: