one wedding and a funereal date... 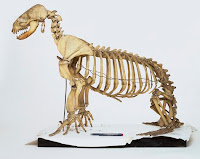 Last Friday I went to a wedding; a wedding so strange I’ll blog about it another day. This post is about the strange date I had last night with the strange chick I met at the strange wedding last Friday.


At the strange wedding, we were seated next to each other during the reception function, which was held in the dining room at The Australian Museum. As soon as this strange chick saw she was sitting next to me, she put her hand excitedly over her mouth and squealed, ‘OMG, it’s you !!!’
You see, twenty minutes earlier, before being seated for dinner at the strange wedding, all the guests had been milling around drinking champagne in a small ante-room off to the side of the dining room. This room contained a collection of small-to-medium, generally unremarkable Australian mammals, in skeletal form, free-standing on slightly-raised plinths. I had been carrying two drinks back from the bar, wearing my splendid black-tie best, when I clipped an unseen plinth, stumbled…and went ass-over-glass into an Australian fur seal, bringing the entire collection of bones down around me.
Anyway, after recognizing me as the strange boy responsible for dismantling the fur seal, the strange chick and I spent a lovely evening chatting…at the end of which we arranged to have a more intimate dinner on Sunday night.
So, last night we met at a very trendy new wine bar in Surry Hills, which considering how well things had gone at the strange wedding, should have been nothing more than a formality prior to my taking her home and dismantling her fur seal…so to speak.
Except that it didn’t turn out that way at all.
About thirty minutes into the date, I asked the strange chick ‘where she was from’, because although her accent was obviously Australian, her appearance was decidedly Oriental, with perhaps a touch of something else. Never mind that this blend of features is just about my favourite anyway, I simply wanted to enquire as to her ethnic origins. A very close girl friend of mine, whom I dated briefly in Tokyo before settling for a long term friendship instead, once confided that enduring a first date with me was like being ‘Clarissa Starling’ to ‘Dr Hannibal Lechter’ in their initial prison conversation from ‘The Silence of the Lambs’.
In hindsight, I wish to fuck I’d asked her what her star sign was now.
'What do you mean “where am I from”…,’ she snapped back.
‘I just mean what’s your…er…um…lineage…you know…’
‘I’m a fucking Australian, just like you…born and bred here, mate.’
‘Yes, I can see that (I couldn’t actually)…but obviously I wasn’t referring to your place of birth as much as I was asking about your ancestry.’
‘Well, if you must know…my father was American and my mother was Indonesian…’
And then it came to me…perhaps the most devastatingly clever line ever delivered on a date anywhere in human history, although I won’t take credit for its invention, because I heard the joke many years ago…but I’d guarantee no one has ever had the opportunity to deliver it, unforced, in a social situation such as this.
‘So, I guess that makes you an Amnesian…’
At this point I fully expected her to sweep the food and wine off the table, climb on top of it, hike her skirt up round her ears, lay back and spread her charms before me like an Amnesian banquet.
Except that it didn’t turn out that way at all.

Sensing that the situation was rapidly spiraling out of control, I went for the Hail Mary play.
‘Well could you at least pretend to be an Amnesian and forget this whole conversation ever happened??’
At last she smiled; it was then I knew my strange-boyish good-humour had finally broken through the impenetrable force-field the strange chick from the strange wedding had spent the last two minutes erecting. The food and wine was about to go flying. It was climbing time, hiking time, laying, spreading and banqueting time…
Except that it didn’t turn out that way at all.
Still smiling…
‘I think I’d like to go home now.’
‘Yes, that’s probably a good idea…’

Some days I wish I was a fucking Amnesian…
Posted by fingers at 10:24 PM 90 comments:

sheiks on a plane... 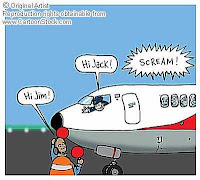 I defy any of you to tell me you wouldn’t get a just a little nervous on an airplane if three young men of distinctly Middle-Eastern appearance, dressed almost identically, with no carry-on luggage, suddenly appeared at the cabin door, came steaming down the aisle and took the vacant seats next to you.
I nearly shat myself...

My parents…wizened old ‘Fourbies’ that they be…choose to fly ‘Emirates’ when returning to the UK for holidays on The British Riviera. Their rationale being that terrorists will never attack one of their own carriers, they are quite relaxed about the idea of being the only Yids on a plane full of camel-jockeys.
Can’t fault the thought-process there.
However, when returning to Sydney, passengers on ‘Emirates’ are shuffled down to Exit 4, to be mixed in with the assorted ‘sleeper cells’ arriving on ‘Iraqi Air’, ‘United Afghan’ and ‘Express Libya’.
This makes it most uncomfortable when I’m summoned to collect Ma/Pa Fingers, standing there amongst the thousands of other relatives, the only White Infidel in a sea of True Believers. I find all those beards and moustaches just a little confronting to be honest. Then again Arab men can be scary as well.
And Allah-forbid, an inbound flight has its’ scheduled arrival time put back even just five minutes and the whole pack starts moaning and wailing as one…
Posted by fingers at 5:17 PM 150 comments: