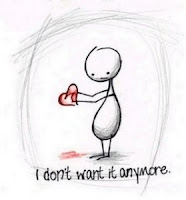 A close friend of mine is currently going through a painful separation with his wife of seventeen years. The specific details are not important; suffice to say there is the usual supply of pain, suffering, guilt, regret, denial and anger on both sides.
What’s slightly different about this situation is that I’m seeing it played out for the first time in an arena which includes the social media network.
Facebook !!!
A separation is often similar to the wedding for many guests; friends of the bride on one side…friends of the groom on the other. You pretty much get the same seat for both events unless you’ve managed to cross the floor in the meantime.
Female friends of the groom often cross the floor simply due to the irresistible force of Gender Gravity or an acutely overdeveloped Sense of Sisterhood…whilst female friends of the bride only ever cross the floor when they find out she’s been sleeping with their husbands or boyfriends.
Male friends of the groom almost never cross the floor because they are loyal and true to the bitter end…and it provides excellent camouflage in case they want to take a shot at the outgoing wife somewhere down the track…whilst female friends of the groom have almost no reason to cross the floor other than just to hang out with all the girls and talk shit.
On ‘Facebook’, you indicate your intention towards either camp by using the friend/de-friend button, which because of the accompanying changes to your privacy/privilege settings, necessarily gives you a very different view of the action afterwards, once the post-matrimonial fur starts to fly.
Of course some guests remain loyal to both camps…which is terribly admirable and non-judgmental of them…and for which they are duly rewarded by being branded a spy in the event of any leaks between the camps.
But enough of the cyber-politics associated with divorce-watching…the real point of this post is to solidify the combined wisdom, advice and messages of support that one sees on a ‘Facebook’ separation thread into one universally idiomatic masterpiece.

And the truth is that life goes on…despite apparently being too short for some but long enough for others…to heal all wounds and regrets…although you should never really have them…and that as long as you move on…and keep moving…whilst at the same time remembering to stand tall with your head held high and your chin up…that some doors will close and others will open…proving you can never really know what’s just around the corner…although you can always be sure the sun will continue to shine…because tomorrow is another day…and there are plenty of other fish in the sea…
Posted by fingers at 9:54 PM 102 comments: