don't give me that Turnbullshit... 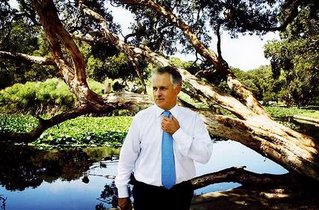 It takes a lot to outrage me !!!
You can annoy me by simply putting the kitchen knives back in their block with the cutting edge face-down…but it takes a special kind of cunt to outrage me. Malcolm Turnbull may just be that special kind of cunt ??
Now, I have a great deal of respect for Turnbull. He is after all an old Sydney Grammar boy; Shit…he even topped the year on several occasions (whereas I only managed the feat once). He’s a Rhodes Scholar, a brilliant legal advocate, a journalist, a published author and a successful businessman. In short, he’s a very, very clever man.
And now he’s a rising star in Federal politics, which apparently gives him licence to treat me like a fool.
Recently, Turnbull was promoted to the cabinet position of Minister for the newly created portfolio of Environment and Water Resources. Essentially, I suspect to put him in direct opposition to Peter Garrett, the Shadow Minister for Renewable Power and Passion. Good move too; pitting the brilliant Turnbull against the highly credible Garrett should be a wonderful political contest in the run-up to the next election.
Which is why I’m so bitterly disappointed at being ‘handled’ by Turnbull in his maiden press conference yesterday !!!
Standing coatless (presumably to give the impression he was about to roll up his sleeves and get to work immediately) in front of a watery Centennial Park backdrop (presumably to give the further impression that such bountiful liquidity was the inevitable result of this hard work, Turnbull had the following to say:

"There's a lot of work to be done on water."

Now, given Turnbull’s mighty opinion of himself, I wouldn’t be surprised if he meant walking on it then perhaps turning it into wine…but maybe there was more to his grand scheme ??

"The focus in rural areas has to be changing irrigation use, using it more efficiently and restructuring water plans.”

“In urban Australia efficiency is also important but we have to do more to address supply.”

OK…now I understand. It was a supply issue; why couldn’t anyone else see that ?? All we had to do was get some more water.

“That's been made difficult by a lack of investment by the state governments."

Yeah…that figures; it was bound to be the fault of those state Labor fuckers. Still, if anyone can undo the damage they’ve done…it’s you, Mal. What’s your plan…you know…going forward…in a pro-active sense…in terms of providing a world-class solution to this ongoing problem ??

"We should do everything we can but in a manner that's cost-effective."

I couldn’t agree more. Water IS very useful at times but not at the expense of a steady 10% annual increase in market-cap and shareholder dividends.