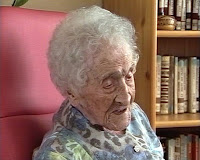 The recent passing of the world’s oldest blogger prompted a little research on my part into the question of human longevity, which eventually led me to a Wikipedia entry on the subject of super-centenarians. Or as they are sometimes known: really old cunts (ROC).

The most famous ROC was the legendary Jeanne Calment (pictured), a French woman who attained the incredible age of 122 years 164 days, before her untimely demise in 1997. I say untimely because if you look at her biography, it suggested she may have become the first human being to reach two-hundred.
For instance, in 1965, aged 90, with no living heirs, Jeanne Calment signed a deal, common in France, to sell her condominium apartment ‘en viager’ to lawyer François Raffray. Monsieur Raffray, then aged 47, agreed to pay her a monthly sum until she died, an agreement sometimes called a ‘reverse mortgage’. At the time of the deal, the value of the apartment was equal to ten years of payments. Calment lived more than thirty additional years, saying: “Best fun I’ve ever had watching that smart-prick lawyer shithead twist in the wind.”
In 1985, then living on her own at spritely the age of 110, Calment was moved into a nursing home after burning down the house while attempting to spot-weld a leaking water-pipe, claiming: “Fucked if I’ll pay some ass-raping plumber to come and fix such a small, pissy job.”
At the age of 114, making her the oldest actress ever to appear on screen, she starred in the 1990 film ‘Vincent and Me’ as herself, uttering the immortal line: “If you try and feel me up again Van Gogh, I’ll cut more than just your fucking ear off, you hideous, misshapen orangutan.”
Calment smoked until she was 117, quit, and then picked up the habit again at 118 years of age, telling her 80 year old physician: "Once you've lived as long as me, then you can tell me to give up cigarettes, you know-it-all cunt.”
Aged 120, she released a rap CD entitled ‘Time's Mistress’, attending the Grammys and getting into a scuffle on the red carpet with ‘Fifty Cents’, about whom she said, ‘Fifty fucking cents ??I wouldn’t give you five centimes for that crap-filled jungle bunny.’

Alas, poor Jeanne, the feisty little ball of gristle who looked as though she’d fallen of a charm bracelet, passed away in 1997, cut down in the prime of her life at 122 and a half years of age.
They say it was ‘natural causes’…but I think you’ll see (in my next spine-chilling post), there is more to this mystery than meets the eye…
Posted by fingers at 8:57 PM 51 comments: 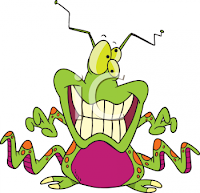 I never really post entries concerning my love-life unless they involve incidents from the distant past. It’s never been my policy to chronicle a potential romance in real-time, on the net, in full view of my doting readers. Then again, it happens so rarely these days that it’s hardly a policy which needs to be set in stone…
Nevertheless, since I recently (and publicly) alluded to the fact that I’m currently hunting ‘The Elephant’, it seems more than a mere coincidence that I’ve begun receiving unsolicited relationship advice from complete strangers via e-mail. It seems as though some of my adoring fans are just a wee bit jealous…

‘Dear Fingers, do you know this woman (web link attached)? She lives in your neighborhood. She is much prettier than your girlfriend. You can talk to her and maybe she will agree to go on a date with you. I went with her last Saturday and it was lots of fun! Highly recommended!’ This terrific review apparently comes from Erin Mercy, however I think I recognize Kitty’s bisexual MO when I see it.

‘Dear Fingers, put your left hand and a tissue together. Send your girlfriend away for the night and check this out (web link attached).’ A generous offer supposedly from Carol Arnold, which as everybody knows is Sparsely Kate’s real name.

‘Dear Fingers, I came across you on Classmates.com. How have you been? I am awesome. I work for a video company these days and I am featured in many films on this site (web link attached).’ Nice try Marianne Bolger, but I went to an all-boy school. Besides, the whole e-stalking/movie-making scenario gives you away totally, Travistee.

‘Dear Fingers, so you thought you’d seen it all!? Don't be so positive! Your new girlfriend happened to get into another sex scandal yesterday. This one will exceed everything she’s done before. Here are some photos (web link attached).’ Esther Marcus is the super-sleuth responsible for this damning report but there’s only one woman evil enough to post other people’s photos on a website…eh Kylie.

‘Dear Fingers, do not leave your lady on a farm lonesome. She can replace you with beasts and you will be way out of the competition for the rest of your life. I learned it the hard way (web link attached).’ This ominous warning allegedly comes from someone named Herbert Donald, though given her last post, I suspect it’s the actually the handiwork of Emmak.

‘Dear Fingers, did you know your girlfriend was a tranny with a big, black cock (web link attached)?’ Signed Alison Weber. Oh sure, that completely fooled me, Smack.

‘Dear Fingers, your girlfriend has complained privately to me that your penis is too small to satisfy her. Here is the solution to your problem (web link attached).’ Well, at least Stephanie Shaw has the decency to sign her own name to this litany of deceit; however I know she’s lying about ‘The Elephant’ complaining about it…because the byatch hasn’t even let me fuck her yet…
Posted by fingers at 8:38 PM 73 comments: