So, by then it was about 4am and ‘The Brain’ and I were pulling bongs on the balcony, watching the rain pelt down and wondering what to do with ‘Scary Bob’s’ small fleet of expensive vehicles, both of which were permanently grounded by now.


Eventually we gave up and passed out on the couches, lulled to sleep by the dope and constant drumming of the rain…
I woke up first. My watch said 11-30am and my head was throbbing. ‘The Brain’ was still fast asleep on the adjacent couch, sawing logs like his life depended on it. Outside it was still pouring; I could hear the deluge through the open doors on the balcony. Deciding that a glass of water was in order I swung my legs off the couch and prepared to head off to the kitchen.
WTF ??
As I put my bare feet down, I noticed the carpet seemed to be wet to the touch, which certainly got my attention. I looked around the lounge room; the whole carpet appeared to be glistening. I rubbed my eyes and checked again. It was still glistening…and as I walked towards the balcony doors I noticed the nearer I got to them…the wetter the carpet became underfoot.
While we had been sleeping, the rain had apparently been so heavy it had pooled on the balcony then flowed over the sliding glass door rails and into the lounge room. The carpet was absolutely soaked; every step I took caused a puddle of water to form around my foot. This was not good.
I went over to give ‘The Brain’ the latest update from Catastrophe Central, wondering if this flood would be the straw that finally broke his camel-like back. To my surprise he took the news quite well, saying it had happened before, though not on quite so grand a scale. Apparently, all we had to do was dry the carpets out with a space-heater…
Now, for those readers unfamiliar with space-heaters, imagine an electric hair-dryer the size of a commercial jet-engine. Normally you would use one (1) to warm up your entire backyard for a mid-winter BBQ. These things simply suck cuntloads of cold air in at one end and blow superheated air out the other end…
Over at ‘BHC Ltd’ (‘Scary Bob’s’ building company) they had plenty of space-heaters; they needed them sometimes on construction sites to dry out rain-sodden earthworks, or to help cure concrete when the outside temperature was too low. So, we jumped in a taxi, went over to the BHC warehouse, grabbed one of the company utes and loaded it up with a space-heater.
‘Maybe we should get two,’ said ‘The Brain’.
So we did, taking them back to Lane Cove, hauling them into the lounge and setting them up at either end of the room. We plugged them in facing one another and stood back as they roared to life, the giant elements deep in their bowels glowing orange with electrically-resistant rage, while the built-in fans sent a blast of super-heated air barreling across the space between them.
Within minutes the temperature inside had become too warm for comfort, so we throttled the space-heaters down a notch or two, then went downstairs, where it was considerably cooler…and began what turned into a very long game of ‘Monopoly’.
If someone landed on ‘Free Parking’ they had to skull a nip of bourbon, going to jail meant a bong-hit…Mayfair with hotels was big rent and a punch in the arm. We started at about 2pm and at 6pm we decided to take a break and go check on the carpet-drying, so we trudged up the stairs to the lounge, the air temperature soaring with each upward step…excellent drying conditions.
As long as I live, I will never forget the scene at the top of the staircase…
The soggy carpets were dry. Bone dry. Tinderbox dry. And, being a high-quality wool pile, they had also shrunk nearly a foot away from the walls on all sides, pulling up floorboards as they receded to the centre of the room.
‘Holy fuck !!!’
‘Oh mate…’
‘Fuck me.’
‘You’re so fucked…’
We trod gingerly over the shrunken remains of the still-steaming carpet, pausing to note that the case of red wine ‘Scary Bob’ usually kept in the bar had popped every cork, the contents of the bottles now just a slow-moving ooze of reddish molasses which crept, glacier-like in a downwards direction, finally coming to rest on the turntable of the ‘Bang and Olufsen’ stereo.
‘Oh my god.’
‘You’re so, so, so fucked, Brain.’
Then there were the canaries, ‘Snap’s’ prize-winning pair of breeding canaries, resting peacefully (and now permanently) on the floor of their cage in a somewhat medium/well-done condition.
The tropical fish were nicely juxtaposed, ironically floating at the top of their tank, eyes wide-open in final disbelief at the sudden global-warming extinction event.
The large cherry wood china-hutch, a wedding present if I remember correctly, twisted and bowed by the contraction of its fibrous tissues, was so utterly warped that the glass window-panes in each of the doors had fallen out, smashing themselves to smithereens on the floor.
There was more…much, much more…but those were the highlights…and I’m sure you get the picture.

please let this be the end... 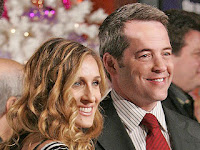 I’m currently completing the final chapter of ‘The Brain’, however since every chick on the planet seems to have been swept away in the ‘SATC’ tidal wave, I might take this opportunity to have a moan.


One of life’s greater tragedies was/is that I used to be married to a girl who was/is an absolute clone of Sarah Jessica Parker. They didn’t/don’t just look similar…they were/are fucking identical twins separated at birth. Same age, same body, same face, same legs, same bongos…same everything. And when I say identical, I mean identical on the days when SJP looks hot; when she’s got the straight hair happening and isn’t wearing a tartan mini-skirt with red knee-high socks.
Now I don’t carry much baggage from that period of my life (anymore), however the sight of SJP on every billboard, every magazine cover…and now every blog is unsettling. I didn’t mind it back then; it was way cool to be boning an SJP-lookalike. These days I wish I’d been boning one of the other ‘SATC’-chicks…maybe Miranda…since they don’t seem to get as much exposure on the movie promos.
‘SATC’ was launched in 1998, while the ex and I were living in Japan. I don’t think I even knew who SJP was back then, having never seen ‘Footloose’ or ‘Mars Attacks’, however the massive publicity campaigns accompanying the blockbuster new TV series soon changed all that. Suddenly everyone was saying, ‘Hey Fingers…do you realize that Sophy looks exactly like SJP?’
Yes…I did, although at that stage of our relationship, I was more concerned about her weeing in the fridge at night
It soon got to the point where Sophy and I would go out in Tokyo for a walk and get approached by young Japanese girls wanting SJP’s autograph. At first, Sophy would tell them to fuck off; she was a short-tempered chick…and quite shy deep down…but quickly she began to take a perverse pleasure in forging SJP’s signature and letting the Japanese girls think they’d met a TV star. Sophy spoke nearly-fluent Japanese, which almost none of the Japanese girls found strange…and she’d jibber away with them, giving out tidbits of juicy gossip about the show; what happened on the set, who was fucking who off-set, hinting at bizarre twists in upcoming episodes…
I would stand to one side, minding my own business, trying not to appear bored and attempting to piece together the gist of the conversations with my basic grasp of the language. To my untrained ears it sounded mostly like. ‘Nani…nani…nani…Carrie-san…nani…nani…nani…Blodelick-san…nani…nani…nani…chigau desu…’
Which in fact it was; I later discovered that the Japanese girls were usually asking why I (Matthew Broderick) looked so much older in real life than I did on screen.
CUNTS…
Posted by fingers at 4:31 PM 127 comments: