There are some really, really, terrible sports in The Olympic Games. And by that I don't simply mean the womens' events (although it's what I'm secretly thinking, byatches).


'Citius, Altius, Fortius'...'Faster, Higher, Stronger', that's what the games were meant to be about. Running places quickly, jumping over things, lifting huge objects, throwing stuff a long way; like you'd do in battle. Like they teach you in Man School.
So, with this in mind, I'd like the IOC to stick the following 'sports' up its collective ass.

Synchronised Swimming: This ridiculous drivel has no obvious point other than the requirement that the contestants do it in perfect harmony. It is the underwater equivalent of two people rubbing their heads and tickling their tummies in identical fashion. Besides, there is no place in sport for any activity that demands the use of nose-clips.

Diving: This is a complete wank-fest; like a cocky-walking competition. Who gives a flying fuck about all the twists and rolls ?? The point of diving is to get from a high platform into the water safely. The only way I'd watch diving is if they reduced the landing area to 1 square metre of pool water and gradually raised the height of the platform until people started missing.

Walking: I don't care how difficult this is...it's silly and undignified, with all the competitve drama of a 'quiet-shouting' contest.

Artistic/Rythmic Gymnastics: This is nothing more than an Olympic version of 'Dancing With The Stars'. Gymnasts in lycra, wearing mascara, adhesive sparkles and fingernails painted to resemble the flag are not athletes. And the women are even worse. Anyway, once judges get involved in an objective manner, the whole spectacle becomes less of a sport and more of an art. Besides which I'm sick of having to 'wait and see whether there are any deductions' for infractions beyond the understanding of the casual observer. Tell you what: fuck the protective mats off and replace them with sharpened spikes. That would get the little cunts concentrating a bit harder AND solve the problem of how to score errors.

Beach Volleyball: For chicks only...and not unless they get naked !!!

Synchronised Diving:The double-whammy combining all the gayness of diving with the sheer pointlessness of synchronicity in sport. It's just a matter of time before the ultimate joke of Synchronised Rythmic Gymnastics is played on us.

BMX: OK, I tried really hard to embrace this as a sport. I love cycling, so the idea of pedal-powered rallycross didn't offend any Olympic sensibilities, however I've now had a re-think. From the sight of grown men riding kiddies bikes, as though they're in Clown School or something, to the thought of medal-winners being interviewed and claiming to be 'stoked', this sport has no dignity. And if they want to find out which riders are on drugs, forget expensive blood tests...just give them a jar of peanut butter and see which ones eat it with their fingers.

Dressage: This 'athletics' abomination is less of a sport than it is a finishing-school core-subject. Why not just give them all big bowls of soup, a spoon and a napkin...then award the medal to whoever can get the most soup out the bowl and into their mouths, with points deducted for bowl residue, napkin stains and slurpy noises... 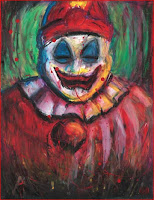 It was during my exhaustive research on the Jeanne Calment post that I noticed something strange going on…
‘Queen Jeanne’ had reigned supreme as the world’s oldest person from 14th February 1991 until her death on 4th August 1997, almost six-and-a-half years, before passing the torch to Marie-Louise Meilleur, a spritely 116-year-old nearly six years her junior.
Meilleur, from Ontario, Canada was at that time still playing in goal for ‘The Guelph Gryphons’, an all-women, semi-professional ice-hockey team, had recently represented her country at the 1994 Winter Olympics in giant slalom, yet on becoming the World’s Oldest Person (WOP) she was dead inside nine months, after the grand piano she was carrying upstairs allegedly fell on her.
Her successor as WOP, Sarah Knauss, aged 117 from Pennsylvania, USA, former personal assistant to President James Buchanan, lasted just eighteen months as titleholder before she was struck down and killed by a startled white-tail-deer during a 50 km bushwalk.
This left Eva Morris of Staffordshire, England, a paltry 114 years of age, as the WOP and she was expected to remain in office for at least a decade. Within twelve months however, Eva was gone, her vital organs apparently sucked out while she was sitting naked over a drain in her Jacuzzi.
Following Eva Morris as WOP were these unfortunate really old cunts:
Marie Bremont, France, aged 114, WOP for seven months before dying of water intoxication while trying to win a ‘Wii console’ in a local radio station's ‘Hold Your Wee for a Wii’ contest, which involved drinking large quantities of water without urinating.
Maude Farris-Luse, USA, aged 114, WOP for nine months, said to have fallen to her death after she threw herself through the glass wall on the 24th floor of the Michigan Met Life Building in order to prove the glass was unbreakable.
Kamato Hongo, Japan, aged 114, WOP for eighteen months, killed when the helicopter she was piloting stalled and crashed into the Siumida River. Startlingly, this was the second helicopter crash she had been involved in that year.
Mitoyo Kawate, also Japan, also aged 114, WOP for a mere two months, thought to have died from severe poisoning when she ate four fugu (also known as pufferfish or blowfish) livers in twelve minutes for a bet The liver is considered one of the most poisonous parts of the fish, but Kawate claimed to be immune to the poison. The fugu chef felt he could not refuse Kawate, for fear of losing face…but ironically lost his license as a fugu chef instead.
Ramona Trinidad Iglesias-Jordan, Peurto Rico, aged 114, WOP for six short months, supposedly died of smallpox ten months after the disease was eradicated in the wild, when a researcher at the laboratory she worked at accidentally released the virus into the air-conditioning unit of the building. She is believed to be the last smallpox fatality in history.
María Capovilla, Equador, aged 114, WOP for twenty-six months, believed to have solicited a man via the Internet to torture, kill and eat her for the purpose of sexual gratification.
Elizabeth Bolden, US, aged 116, WOP for less than four months, who according to official court transcripts was bludgeoned to death with a fire extinguisher by the crew of a commercial aircraft after attempting to storm the cockpit in a failed hijack bid.
Emiliano Mercado del Toro, Puerto Rico, aged 115, the only male WOP in the last 100 years, who legend has it died laughing while watching the Spanish-subtitled ‘Kung Fu Kapers’ episode of ‘The Goodies’, featuring a Scotsman in a kilt battling a vicious black pudding with his bagpipes.
Emma Tillman, USA, aged 114, spent just FOUR DAYS as WOP, before insurance investigators say she climbed into a storage rack at the Ford Motor Company’s Flat Rock casting plant to retrieve a part because the parts-retrieval robot had malfunctioned, when suddenly the robot reactivated and slammed its arm into Tillman’s head, killing her instantly.
Yone Minagawa, Japan, aged 114, seven moths as WOP, famously killed when an eagle dropped a tortoise onto her head (attempting to crack open the shell) after mistaking it for a rock…

My point: I find it hard to believe that all these people, after managing to live well into their hundreds, don’t seem to last terribly long after becoming the World’s Oldest Person.
I think there is a serial killer, a crazed madman perhaps, systematically offing these really old cunts. If I were Edna Parker, currently aged 116 of Illinois, USA...I'd be afraid.
Very, very afraid...
Posted by fingers at 3:45 PM 33 comments: