It’s not something I’m particularly proud of…but I have a bit of an addiction to pizza; specifically mushroom pizza.


For the last twenty-five years I’ve had at least one a week, sometimes more. In the early nineties, when I used to order from ‘Pizza Hut’, they once sent me a free ‘PH’ basketball because I had ordered more than fifty pizzas in a six month period.
And it’s always the same order: One large thin and crispy double mushroom pizza…no ham, no onions, no fucking anchovy, no pineapple and no exotic yak cheese…just mushrooms…on mozzarella.
When I moved to Cunt Point and was no longer in the ‘Pizza Hut’ delivery area, I switched to a local pizzeria which has been faithfully delivering my humble order for the past five years.
As Kitty will be falling over her keyboard to confirm, I like to eat my pizza with butter. Yes…butter. I take a slice of oily mushroom pizza and put a generous helping of full-salt butter on top…and I eat it.
Please save your health concerns for someone else; I’m beyond the reach of medical reason. Dad’s stroke may have changed my smoking habits but nothing short of a personal and massive coronary will change my attitude towards pizza with butter.
Still, this post isn’t about dietary nightmares; it’s a story about pizza.
So, I’ve been ordering the same pizza from the same local joint for the past five years. We have the same conversation every week…practically word for word. I’ve become quite friendly with the owner too.

‘Hello PizzaBella…how can I help you ??’
‘Hi…this is Fingers up in Cunt Point…can I have my usual please.’
‘Sure Fingers…one large thin and crispy double mushroom on mozzarella.’
‘Thanks Giuseppe (not his real name).’
‘OK.’

Every week for five years…practically word for word.
Until last night.

‘Hello PizzaBella…how can I help you ??’
‘Hi…this is Fingers up in Cunt Point…can I have my usual please.’
‘Sure Fingers…one large thin and crispy double mushroom on mozzarella.’
‘Yes thanks, Giuseppe. Actually…no…tonight could I please have one of those awful deep-dish, pan-fried horrors with the molten goat’s cheese inside the crust.’
‘Really ??’
‘Yes…and instead of just double mushroom can I have olives, asparagus and sun-dried tomatoes as well.’
‘Are you sure ??’
‘Yes…also could you please put too much mozzarella on top and cook it at one-million degrees Celsius so that even after you slice it with the pizza-cutter the cheese reforms itself into a solid mass.’
‘Huh ??’
‘Oh…and could you ask the motor-bike delivery guy to go round the corners really, really fast so that the solid, congealed mass of super-heated mozzarella slides off the top of the crust and deposits itself on one side of the box…’
‘Um…I don’t think we can do a pizza like that for you, Fingers.’
‘WELL YOU FUCKING DID LAST WEEK YOU DUMB WOG CUNT…’

After he stopped laughing, Giuseppe sent me a complimentary pizza to make up for the previous week’s disaster, which goes to show that there is sometimes plenty to be gained from being a rude prick…
Posted by fingers at 6:53 PM 43 comments: 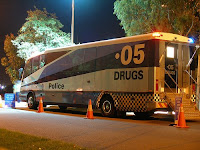 OK, time to revisit the past and tell you a story…it’s a bit long, so please bear with me and don’t moan for me to ‘get on with it’ over the next few posts…


The year was 1983, my parents had just retired and sold the business they ran for twenty years, cashed in their super, bought their first Mercedes Benz and were off to the UK for a month-long vacation.
I was in the last year of Law School, still living at home, looking at forty years of hard-work ahead, had no money and was driving a battered Toyota Celica held together with duct tape.
As I dropped my folks off at the airport in their nice, new Mercedes…I remember Dad saying, ‘Fingers, your car is a mess…through no fault of your own…please feel free to use the Mercedes until we return.’
Dad always maintains he said, ‘Fingers you irresponsible cunt…take the Mercedes straight home, park it, lock it…and do not touch it while we’re away for any fucking reason.’
The exact words he used are still contentious bones even twenty-five years on; whatever they were, I thought they were somewhat vague and ambiguous.
Anyway, at the very least, I was sure Dad wouldn’t mind my borrowing the car for something as sensible as a ‘$20-all-the Cointreau-you-can-drink’ night at ‘Metropolis Nightclub’ in North Sydney, so a few days later I jumped in the Mercedes, drove over there, paid my $20, drank about $100 worth, then at 3am got back in the Mercedes to drive home.
Sadly, in those days I was a serial drink-driver...
*This story is not intended to glorify that practice either; I was a young moron who enjoyed driving cars, drinking and combining the two as often as possible. Thankfully I never injured a single person during the whole stupid phase…a freakishly unlikely piece of good fortune.*
Enough editorial…back to the good stuff…
So, having successfully navigated my way back to the Eastern Suburbs, I was coming out of the Kings Cross tunnel and decided to floor the Mercedes down the hill and see what those clever Germans had put under the bonnet. I estimate I had that fucker up to 140kph as I got to the base of the hill, where the road flattened out into a long stretch, and as I looked up to see where I was going, I noticed the police had set up one of the new ‘Random Breath Test’ (RBT) buses by the roadside. These were quite rare back then, so I had no pre-conceived ideas about what I would ever do if I approached one and was clearly over the legal limit to drive.
The police manning the RBT bus had seen me flying down the hill and had run out into the middle of the road with their fluorescent batons; they were very keen to have me pull over for a chat and a blow in their bag. I, on the other hand didn’t see any upside in that and prepared to ‘run’ their feeble roadblock and disappear into the distance before they could give chase, so I gunned the motor and kept going.
Then as I got about one-hundred metres from the bus and the cops, I chickened out, hit the brakes…a little too hard as it happened…and put the Mercedes into a violent tailspin. The last thing I saw, as the car went through 360 degrees was the panic-stricken cops hurling themselves into the flowerbeds on the median strip which divided the road.
Oh yes…and I saw the big, blue bus with ‘POLICE” painted clearly on the back.
The next few seconds are still a blur, however there was much screeching rubber noise, a lot of spinning motion and I closed my eyes…then a loud bang, a cessation of the spinning…and when I opened my eyes I found I had come to a halt…presumably because the Mercedes was now embedded up to its engine-block in the back of the big, blue bus with ‘POLICE” painted clearly on the back.
As far as I’m aware I am still the only driver in New South Wales to have actually run into a ‘booze-bus’ as we call them here ??
Meanwhile, the cops had climbed out of the flowerbeds and were now running over to the wrecked Mercedes, no doubt anxious to see if I was alright…