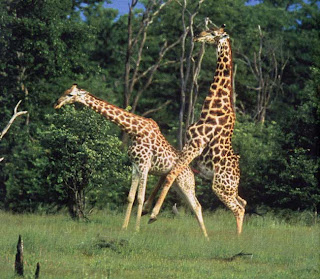 So I went speed dating last week and it was a much more rewarding experience than I’d anticipated. You know the drill; seven guys, seven chicks, seven minutes to make their respective cases, then the chicks take a step to the left and the interview juggernaut moves on until all the chicks have met all the guys. At the end of the evening, if anyone fancies anyone else, they ask the moderator for their details, the moderator checks with the intended victim and if it’s OK with them…the deal is made.

Well, even I can hold my conversational end up for seven minutes, especially when compared to the sort of competition provided by the other six cabbages in the game, so I was quietly confident of at least one expression of interest.
Which I got; a nice looking brunette, Vanessa asked for my contact details and I gladly gave permission to release them. Vanessa was thirty-six, single, a veterinary surgeon at Taronga Park Zoo…and she’d had a rough day. The zoo had apparently lost one of their adult giraffes to a lightning strike during the violent storm that battered Sydney that afternoon, so she was quite depressed about it all.
Rather than let Vanessa grieve in peace, I asked why they didn’t have lightning rods placed around the compound to conduct the deadly electrical bolts away from the giraffes, given that they’re so fucking tall and come with those two stupid little horns, which as far as I can tell serve no purpose other than to actually attract lightning?
Vanessa mistook the sarcasm for some sort of sincere concern on my part for the welfare of the surviving giraffes and decided I was worth pursuing. We had a private little chat around 9pm, felt an instant attraction and in the spirit of speed dating resolved to keep the evening’s momentum going.
We went for a quick drink at ‘MPB’ around 9-30pm, grabbed some fast food in ‘Burger King’ at 10pm, sped back to Cunt Point on ‘The Stealth Vespa’ and leapt into bed for a quick fuck at 11pm, had a short post-sex nap, woke up around midnight for a brief discussion regarding our respective dreams for the future, realised we had somehow grown apart, agreed to a trial separation by 12-15am, gave the relationship a second chance at 1am, ran out of things to talk about by 2am, spent half an hour in silent resentment of all the time we’d wasted and finally split up for good at 3am.
Vanessa left in a taxi at 3-20am, she SMS’d at 3-30am to say she missed me.
I sobbed quietly until nearly 3-32am.
By 4am I couldn’t remember what she looked like anymore.
It’s true what they say about time healing wounds…
Posted by fingers at 4:09 AM 52 comments:

the world is not always your oyster... 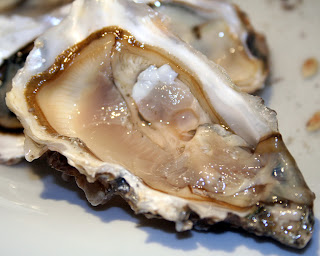 THE BRIEF: Create a character, give it a fear, then introduce it into a situation where it confronts and conquers that fear...

Geoffrey stared at the slimy, grey ball of muscle on the fork, attempting to vanquish his total disgust through sheer force of will. He noticed a sliver of nacre, its appearance iridescent through a subtle trick of light, embedded in his thumb; an injury sustained in opening the oyster’s shell only minutes before. Geoffrey brought the slimy, grey ball closer to his face, its horrid image blurring as the focal length corrupted. Seemingly transformed into the eye of some tiny Cyclops, the slimy, grey ball returned Geoffrey’s stare.
‘You can’t eat me. You’ll never eat me,’ it hissed.
This time his slippery little opponent was badly mistaken, thought Geoffrey, only semi-convinced of his latest strategy’s chance of success but determined not to show even the slightest sign of weakness.
‘You can’t do it, Geoffrey. You know I’m still alive, you haven’t got the stomach for this type of savagery. You’ve never had it, Geoffrey.’ The slimy, grey ball was mocking him now. ‘I’m watching you, Geoffrey…’
With his free hand, Geoffrey slowly and deliberately picked up the pre-cut wedge of lemon, holding it gently but purposely in a position where the slimy, grey ball could best observe it. The Cyclops eye continued to stare, apparently unfazed by any citric threat on Geoffrey’s part.
Standoff.
Suddenly, the slimy, grey ball of muscle appeared to tremble on the end of the fork, though in reality Geoffrey suspected the true cause might have been his own shaky hand. No matter, at last he’d realised what the lemon was for and with a single-minded brutality he never knew he had, Geoffrey took aim at his nemesis and squeezed his fist tightly.
‘Let’s see you watch me with this in your eye, Cyclops…’


ONE OF THE COMMENTS (Miriam):

'As someone who despises oysters I found this difficult to read...'

Yes, well I hate the idea of killing whales but I managed to slog my way through 'Moby Dick', you silly cunt.

'...Why, if Geoffrey hates oysters, is he bothering to force himself to eat one ?'

Because it's my fucking piece and I said so and it's vital to the tag-line, which you'll find at the end of the story, if you're brave enough to push through your distate for oysters and read what I've written, you silly cunt. Why did your fuck-boring character go to the local supermarket to buy fuck-boring mangoes when she knew her fuck-boring ex might be there with his fuck-boring new fuck-boring girlfriend ??

'...some lovely imagery though and your personification of the oyster is marvellous...but the ending is confusing. Does Geoffrey throw the lemon at his enemy...'

He squirts juice in its eye, Miriam !!! The metaphorical eye that I took great pains to craft. The eye that isn't really an eye, except for the purpose of the gag, to squirt the lemon in its fucking eye Miriam...even though I know that's not really what the lemon is for, you silly, silly, cunt...
Posted by fingers at 10:15 PM 36 comments:

Create a character, give it a weakness/fear, then develop a short story (300 words) in which the character’s weakness/fear is exposed.

Kieran slumped into the allotted seat and immediately began his relaxation exercise; inhaling nasally, exhaling orally…slowly, deeply at first…gradually reducing the length of each breath until he imagined the calm flooding in.
He brought his hands together, gently introducing the fingers of one to its partner on the other, then closed his eyes and commenced reviewing the physics of the problem as he saw it. It was simple really. The engines provided the forward motion, causing air to rush over the surface of the huge wings. The wings, shaped in accordance with the principle laid down by Daniel Bernoulli nearly three hundred years earlier, split that rushing air into separate streams. Those two streams travelled at different velocities, creating an imbalance of air-pressure, which would thrust the wings and anything else attached firmly enough to them up, up and away…‘
All well and good,’ interrupted The Beast, its filthy snout breaking the surface of Kester’s flooding calm ‘but all that technical wizardry is sometimes flawed, whereas gravity is constant and perfect.’
Kester’s eyes flew open, just as they always did; he realised he hadn’t taken a breath for nearly a minute. In the seat to his left, Kieran’s best friend Phil noticed it too.
‘You OK, mate?’ asked Phil carefully adjusting the buckle on his seatbelt.
‘Christ I hate flying. I think I’m going to be sick,’ admitted Kieran, reaching for the small plastic bag beneath his seat.
‘You’re a funny guy, Kier…real funny guy,’ said Phil, flicking an illuminated switch overhead and wrenching the microphone free of its bracket in order to bring it closer to his mouth.
‘Good evening, I’m Captain Phil Driscoll and along with my co-pilot Captain Kieran Putz, I’d like to welcome you all aboard Virgin Atlantic flight VS201 to London…’

ONE OF THE COMMENTS (Celia):

‘I think in the space allowed this is a very entertaining piece of writing but I suppose I wonder how long he has hated flying if that is his job. After all, he is a pilot. Was there a defining moment that changed him?’

Well gosh Celia…that is kind of weird isn’t it…a pilot who’s afraid of flying. What a strange twist; ironic even. Hey, why don’t I change the story so that Kester is a passenger and Phil is another passenger sitting next to him? That would make more sense, eh?
You stooopid, stooopid cuuuuuuuuuuuuuuunt…
Posted by fingers at 9:41 PM 28 comments: 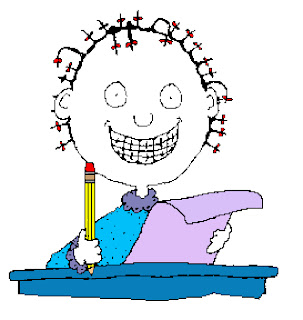 OK, so for the past few weeks I’ve been very busy with Writer School.
Writer School blows very large goats (see how my use of metaphors has improved?).
It’s way too Zen-like for my taste; lots of meditating, closing of the eyes, exploring one’s surroundings with all five newly-electrified senses then frantically scribbling down an unedited stream of consciousness. Last week I had my eyes open and was staring at some chick’s bongos while she was zenning-out, so when the tutor yelled ‘OK, now write what you’re thinking’…I wrote ‘Bongos…want.’
No Pulitzer for me.
Oh…and the best bit. After each writing exercise, we all get to critique each other’s pieces…but it’s POSITIVE feedback only. Can you imagine how much I’m into that?
‘Oh Brenda, I just loved the way you used the ‘bricks of detail’ technique to describe Jenny’s fascinating personal journey of discovery during her Kontiki tour of Goa…’
‘And Rita, Cassie, Miriam, Delia and Patricia, although on the surface your pieces all seemed to be identical journals of lost love, I found that each of you had approached this riveting topic from a wonderfully unique perspective…’
At least I would have done if I hadn’t fallen asleep during the first paragraph.
Did I mention I was one of just two guys in a class of twelve?
That’s right…ten chicks…seven of whom when asked ‘So, why are you taking the Unlocking Creativity course?’ answered ‘I want to unlock my creativity.’
Doh!!!
So, who wants to see what I’ve written…