Why is it that most ‘ploggers’* will quite happily fill out a fifty-question ‘MEME’ but take exception to doing the annual ‘Census’ ??
Why are they gagging for an opportunity to take complete strangers on a magical tour of the mansions of their mind but unwilling to answer a few simple, anonymous queries from the Australian Bureau of Statistics ??
Why will chicks happily admit to their readers that on their birthdays they’d prefer to be tied up with chocolate silly string and taken from behind by an underage neighbour wearing a Superman outfit, or that at work they close their eyes at the desk and fantasize about their female boss whilst masturbating with a lampshade on their head and a space-shuttle inserted in their snatch …but won’t tell the government their age to the nearest five years ??
Why do guys freely confess to carving notch-holes in microwave-warmed vegetables and using them for sex-aids while their wives are out shopping for tandem butt-plugs, or that they used to let the pet Labrador lick hamburger mince off their balls while they lip-synched to ‘Wham’ when they were teenagers…yet baulk at disclosing their salary to within fifty grand ??
Funny old world…

* a new portmanteau created for this post using the words ‘blogger’ and ‘plonker’…
Posted by fingers at 7:24 PM 107 comments: 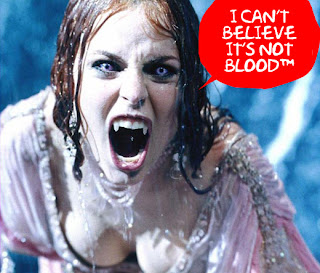 Let’s cut to the chase here; I’m not a fan of period sex. And by that, I don’t mean dressing up like Napoleon and Josephine (which I quite enjoy as it happens)…I mean…


“I do not like red eggs and flange,
I do not like them Son of Sam !!!”
There is nothing remotely beautiful/sensual about menstruation…and if you think there is, you should probably be a coroner, or a serial killer, or both.

What’s worse, at the precise moment of the month when chicks are at their most unattractive, Nature conspires to make them horny as weasels. Very much like guys after twelve beers and a lamb kebab…only worse. Much, much worse…
My own fear of ‘flag week’ sex started in 1978, when my seventeen year old girlfriend had ‘the painters’ in but still tricked me into going down on her by saying ‘Would you like to go down on me.’ It was a cunningly simple plan, based on my love of going down on her combined with my relatively unsophisticated dining palate at that stage.
Meaning, I should have been able to taste the you-know-what…but didn’t.
At some point in the buffet I had to have a wee, so I trotted off the bathroom, turned the light on, looked in the mirror…and saw what appeared to be a naked mugging-victim staring back at me. Not only that but it appeared I’d been attacked whilst trying to lick the last bit of jam out of some imaginary jar…
It was everywhere…and like anyone who possesses what’s called ‘the gag reflex’, my blood-pressure plummeted and I immediately fainted.
Yes…go on…laugh your heads off, girls.
I mean, what kind of psycho does that to another human being ??
And you ALL do it, too…you filthy animals. Even though you know it makes me want to throw up, you taunt me with your plaintive cries.
‘Oh, stop being such a wimp. It’s just a little blood.’
‘Oh come on, it’s all quite natural.’
‘Oh, just think of it as red lube.’
Well, how would you like it if I pulled out my wing-wang, blood pissing out the end of it as though I’d just severed it myself with some garden shears and asked you to pop it in your mouth for a few minutes ??
Yeah…that’s what I thought…
Posted by fingers at 12:10 AM 71 comments: