is the tank half empty or half full... 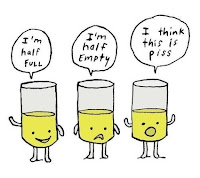 I have this mate, a lovely guy but a bit of a know-it-all, who always thinks he’s right about things no matter how often they turn out differently to what he expected. Hey, no harm in that though; certainly beats having no opinion at all.
Anyway, he and I needed to drive up to Cunts Nest (220 kms away), ostensibly to deliver some furniture to the beach house, so he rented a mid-sized van for the job and we set off with a full load in the back and a full tank of petrol.
We got there without a hitch, dropped the furniture off and immediately headed back home again…
About two minutes into the return drive he said to me, ‘Hey, do you think we can get home on half a tank of petrol ??’
I looked at the gauge, which was almost perfectly lined up with the vertical line showing the tank was either half-full or half-empty depending on the way you look at life.
‘I doubt it, mate.’
‘Why not ??’
‘Well, everyone knows the second half of the tank always seems to empty faster than the first half…some design flaw in the ballast needle or something.’
‘But we had a full load of furniture coming up and we’re empty for the return trip so that should cancel it out.’
‘Well, I suppose it might…but what’s the point of trying anyway ??
‘It’d be an interesting exercise…plus I would only have to fill the tank once more before I return the van if we can make it.’
‘And you’re prepared to risk running out of petrol somewhere on the freeway outside Sydney in order to test your hypothesis ??’
‘We won’t run out !!!’
‘We might.’
‘We won’t.’
‘Why even risk it ??’
‘Coz it’d be kind of cool to do it.’
‘Mate…jumping The Grand Canyon in this van would be cool…running out of petrol in it on the freeway would be a pain in the ass.’
‘We won’t.’
‘We might.’
‘No…fill the fucking tank up at the next station, you cunt.’
‘No, I want to see how far we can go…’

‘Mate, please pull into the next servo and fill the fucking tank…I am not going to get stranded on the freeway because you see this as a major challenge.’
‘We can make it.’ He's Kramer in the episode where Jerry is thinking of buying the new Saab.
‘I don’t care about it enough to try.’
‘Well I do.’
‘Well you’re a cunt and I can see why your wife left you. I’d leave you right now if I had another way of getting home…’

errr...wish I'd been privy to this information about three months ago...

Actually, I kind of like his 120 kph camera/time theory!

Frankie: you should have heard some of the disgusting information I was privy to on the drive.

Jen: I will because the silly cunt will probably run out of words just before the end.

xl: Then you're gonna love his later theory on fuel consumption...

BamBam is the Rainman? Or Kramer? Kramer is banging Frankie? That's just SO WRONG!!!

Looking forward to the next instalment !

fingers: well as long as it didn't include photos, I can live with that....

Now I have a picture in my head of Fingers and Mr Magoo sitting up high in the van ... eyes 2cm away from the windscreen. Mr Magoo's eyes never leave the road as he argues with you.

I have a sneaking suspicion that you're right fingers, altho' with yer mate's OCD observations & calculations, he might just make it. My ol' man does a similar kinda thing - needs juice for the car but will ignore 3 fillking stations on the 'other' side of the road cos they're 'inconvenient'. Drives me fucking nuts.

my tank is not only half empty someone has dumped a pound of sugar in it. I am an eternal pessimist even though I am as healthy as an ox, have no worries and a full head of hair. Go figure. You and Bam Bam must be yin and yang

Very clever blogging....sharing the load, so to speak.

It's like one of those progressive dinners- but who's place will we be having dessert at? Hmmmmmmmm.

Ms Smack has it closest.... the Odd Couple. And I can assure you I'm easily the more NORMAL one!!

As for you Fanny... Mr Magoo? Mind you, I used to love watching that cartoon.

oops you did beat me to the kramer observation didn't you. this is too much work checking two blogs. can't you just try sharing an apartment where your ideas on housekeeping and lifestyles are as different as night and day....oh wait, smack beat me to the odd couple observation as well. wait, can't you just test out this riverting petrol theme while you travel across central australia in a giant bus, one of you on the roof wrapped in foil while the other one has a crisis over being a gay crossdresser all to the strains of 'we are family'...

can we just set up a betting ring and start the odds now?

i'm betting that because bam bam bam blogged it first that he would only do so in the interests of giving you a giant "fuck you, we made it" so i'm betting on him. if you had run out of petrol and been dumped on the side of the road there's no way he would have ever mentioned it again. OR you pulled a gun on him and charges are pending.

MS: I'll tell you what's wrong. Guys saying 'That's just so wrong !'. Take that dick out of your mouth immediately and man-up.

Smack: Conceptually we are but neither of us are really Felix or Oscar. I'm the neat freak but he was the one thrown out of home by the wife. On the other hand I can't see Oscar paddling Felix's butt at Scrabble.

Fanny: He looked so happy playing with his little horizontal steering wheel.

Jiney: You got it. The whole thing got stupider and stupider.

E-K: Where did you get up to before you lost the plot ??

Emmak: You have very good reason to be permanently alarmed.

Ute: Yeah we thought it might be a bit of fun to see a story from two sides.

Bam: Oh yes mate. Nothing wrong with you at all. Bahahahahahahaha !!!

emma: Actually I blogged first. I thought of the idea and I blogged it first. You just read his post first. I see what's gong on here. Consider yourself on double-secret probation...

Finger...baby, weren't you the least bit interested. I mean the probability that it would make it back without running out of petrol was 50/50 chance. Where's that wild adventurous side of you, sweetie?

Not that I would do anything that stupid...I don't want to take a chance on getting stranded on a Australian road...you'll have insects that painfully kill with a slight bite or sting.

Here's some advice. And I'm surprised you haven't thought of it before...zap him with a taser. He'll pass out and most likely piss his pants but hey that's his worry...toss him in the back seat and when he wakes you'll be back in the city.

if he's krammer...you be jerry. if you think jerry would never do that to krammer then you be elaine bener. God know she'd do it just for shits and giggles.

and hey...if you're gonna be elaine, do that goofy dance elaine did every time she danced. :)

So what do you think...smart huh?

I don't know about half empty or full, but I sure got tanked last night...

oh so posts really don't come into existence just cos i read them first? wtf......

then i'm changing my bet - you ran out of petrol.

at the exact same moment????

there's no way for me to predict the outcome then.

wait, are you the same person like michael and latoya jackson?

Or just a schizophrenic??

emma: Spooky huh ?? Like one of those pre-planned simultaneous broadcasts in 10 places at once. Anyway I can assure you we are different people. Total opposites really. Like matter and anti-matter. Or in this case matter and doesn't matter...

We chat at work on Reuters Messenger (like any other kind of chat really)... believe it or not, I'm actually his client.

But his friend first and foremost, above any professional relationship, which is why he gets away with being such a cunt to me.

saying you're his client makes him sound like a working gal...

but well played with synchronised publishing because now i don't have a hope in hell of guessing the outcome.

Hey ...why if it aint ole Finger

Is so radical. There's me thinkin you were Ozzie's answer to Cat-Weazel and here you are...a har man- swearer.

I just know you will be kindly and gentle about it all.

Mathematical logic. Sure it works in practice, but does it work in theory?

MrP: Aw, I was really hoping you were going to be my first genuine troll and that we would spend 2011 locked in an epic struggle...but you're just looking for a bit of a cuddle, aren't you ?? Well, you're not gonna fucking get one here.

E-K: OK, I'm just constructing my criticism now. I'll be over as soon as it's done.

DeC: I bet that one gets a laugh down at the String Theory workshop...

Will one of you just hurry up and finish the damn story ???

A similar "why your wife left you" comment earned me a few bruises, earned him a few back. When his wife came back begging to be taken back... and saw the bruises thought they were love marks...and left him again. :)

Man up? Now I've got flashbacks of that Aussie actor running around shouting "Harden the fuck up" running through my head. I think I'll go to YouTube and watch the videos again.

You guys should get married.

I loved this his and his accounts! How homoerotic. I hope there's a vid with the next clip!

And don't make us wait too long eh, Fingers?

(continued from Bammers)
...but there's no way in fucking hell I'd ever intentionally get on the free way without a full tank of gas. I'm just not that excited about tempting fate. =]
The tank is always half empty!

or are you guys still waiting by the side of the road with a petrol can, living off grubs and low flying birds?